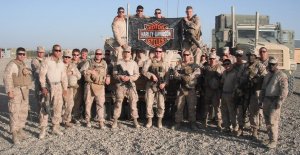 In the 60’s and 70’s, musical Utopia for many of us Boomers, English blues-rock band Ten Years After produced eight Top 40 albums. Their name apropos of the 10-year anniversary of the destruction of WTC, two of their hit songs seem fitting, as well. “I’m Going Home” is for all American troops, from Korea to Iraq, from Okinawa to
Somalia. “I’d Love To Change The World” is both timeless and myopic, as much the latter as the former.

World peace is the satirical wish for every beauty queen spoofed in sketch. Whether or not realistic, until that day comes it serves us well to remember that there are those who have pledged their lives to the destruction of America. The why is unimportant, just as they can not understand our way of life, we can not understand theirs. Our foreign
policy tends to implement the notion that all nations of the world crave and would thrive living the American dream. I would challenge that notion.

Politics, religion and philosophy aside, today is about reflection.
About those who perished on that day 10 years ago, simply living their lives as they chose,
about those who raced into the eye of disaster, as they always do, in service to their communities and their country.
About those who watched helplessly as their comrades lost battles to save victims and themselves, some disappearing forever, except from in our hearts.
About those who rushed into the aftermath and today suffer debilitating afflictions
and about those who took up arms in defense of family, friends, country and the ideal that is the heart of a great nation. If not the “Greatest Generation”, those who answered the call are certainly A Great Generation.

To you, seeking only to defend that which you hold most dear, often paying with your life I say, “Thank you and Godspeed. You will not be forgotten”.

The heroes of World War II are leaving us at a rate of about 1000 per day, their stories often lost with their passing. History is their legacy and the lessons left behind by those who have gone before. Today is about reflection. Today is about those lessons.

I try to stay calm and eat healthy.
View all posts by rj1340 →
This entry was posted in Patriotic, Political, Veterans and tagged heroes of world war ii, politics. Bookmark the permalink.